Posted on December 23, 2017 by getshotbyella

During the Spring of 2020, Italian-American artist Ivo David, spent many quiet days painting alone in his studio. Sharing his recent work (pictured with face mask) created during the coronavirus (COVID-19) quarantine, he expressed, that despite the solitude, “we’re all together.”

David is going  through a lot of charcoal for an ongoing project, assisted by Mark Holt, senior account manager at ABC Printing in Vero Beach, Florida. Holt and his team are printing for the artist. “We have the privilege at ABC Printing to help the Maestro Ivo David to create a digital record of his works depicting the 14th century Italian writer Dante Alighieri’s poem The Divine Comedy. ABC Printing is working with David on reproductions of Inferno, the first 35 images in a three group series of David’s’s charcoal sketches that lead to the creation of one of the most treasured masterpieces from his collection.” says Holt.

“Religious subjects form the soul of my art,” explains David. Pictured below during a visit to David’s Florida studio is the Reverend Michael Massaro, admiring the artist’s painting Raising of Lazarus, on the left, and looking at several other religious paintings in David’s studio, on the right. 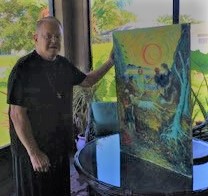 The son of Italian Immigrants, from the regions of Naples and Benevento, Reverend Massaro moved to Vero Beach, Florida in 2000, where after serving one year at St. Helen’s Church and twelve years at Holy Cross Church, he commenced his present position ministering to the spiritual needs of parishioners at Saint John of the Cross Church.

“It was an honor to have a surprise visit from the Reverend Massaro in my studio,” says David. “The Father was particularly interested in my religious and Bible subjects, including my new version of  The Last Supper and Raising of Lazarus. Father Massaro is a great and knowledgeable admirer of my art work, as well as an Italian from my same County of origin. We have been good friends for a long time. He is extremely   knowledgeable about the subjects of my religious art and a fine classical adviser in these matters.”

David’s detailed sketch of The Last Supper is pictured to the right. To view additional religious sketches by David, see his depictions of 14th century Italian writer Dante Alighieri’s poem The Divine Comedy, including the main religious characters present in Dante’s masterpiece, at the following link:  http://ivodavidfineart.com/DivineComedy.html

Fine artist Ivo David in front of one of his many works  depicting scenes of Dante’s Divine Comedy at his Florida studio. Photo Shot By Ella Photoart, LLC

A third generation artist, David was born in San Leucio del Sannio, a city in the Province of Benevento in the region of Campania in Italy.  With a paint brush in hand from the time his small fingers could grasp, David’s works have shown internationally and become part of the world’s finest galleries and collections. A world traveler, David resided in New Jersey for many years before moving his studio to Central Florida, after a visit with one of his clients in the Sunshine State.
David’s lifelong artistic journey is a story that encompasses ultimate highs, youthful rebellion, time in a Franciscan monastery, interactions with master artists, including an artistic debate with Spanish surrealist painter Salvador Dalí  in 1954 when they were exhibiting in Rome, and a share of triumphs and struggles that would fill many books: in fact, they do! David’s work and events have been covered by numerous news media. In 1956, he launched an artistic movement, originating in Europe,  known as the theory of Fusionism 56, detailed in his writing entitled Manifesto of Fusionism‘56. An accomplished poet, his poems were compiled in the book Memories of an Artist first published in 1994. 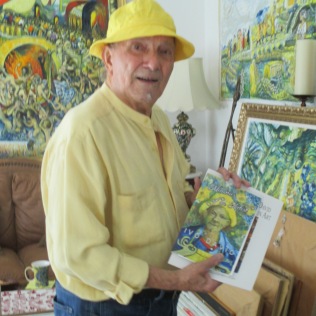 Fine Artist Ivo David with his book of poems Memories of an Artist. 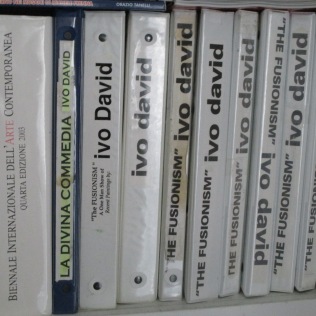 Books on the life of fine artist Ivo David and the Fusionism artistic movement he founded are displayed in the artist’s studio.

Above photos, Shot By Ella Photoart, LLC, depict (left) artist Ivo David in his studio with his book of poems and (right) a shelf filled with a few of many books about his work and his Fusionism 56 artistic movement.

David is a prolific sketch artist and his studio houses stacks of immense pads filled with the detailed drawings that precede each of his paintings.

The moods of David’s works are ever changing. The artist’s sketches and paintings of 14th century Italian writer Dante Alighieri’s poem The Divine Comedy, of Hell,  Purgatory and Paradise, commenced in 1975, encompass a complete scale of chromatic intensity. He weaves pure colors with just the right values of dark and light to create the diverse scenes from Dante’s narrative poem. Very few artists have undertaken the arduous challenge of depicting Dante’s poetic visions of the afterlife, regarded among the world’s greatest literary works. Many of David’s most recent works capture the warmth and light of the tropical landmarks and landscapes near his Florida studio.

In 2017, The Fusionist Art work of Ivo David was a solo exhibition at the Emerson Center Gallery in Vero Beach, Florida. See video at https://www.youtube.com/watch?v=1bOzznidgR4 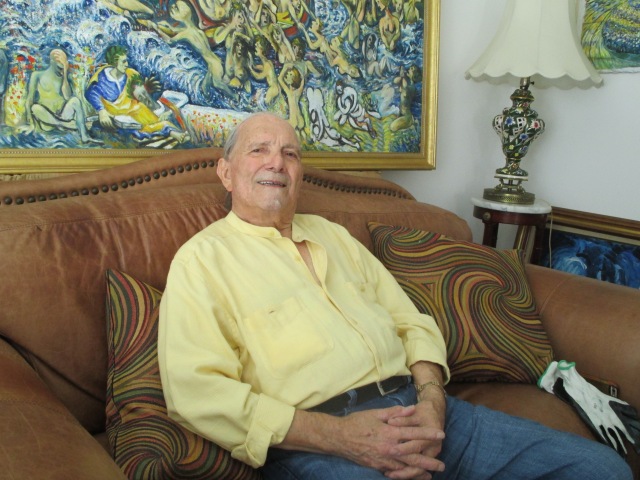 For more information about fine artist Ivo David, go to http://ivodavidfineart.com/ or email at IVODAVID53@GMAIL.COM